For a brighter future...
SUPPORTING INDIVIDUALS, FAMILIES AND RESEARCHERS
IN THE CYSTINOSIS COMMUNITY
BBC News - Coronavirus: A user's guide to wearing a face mask to the shops https://t.co/CpU6SwyzqR
Wed Jul 15 16:31:21

On Saturday 9th August, the Fishermen’s Mission held their annual Peterhead Harbours Open Day. This event involves various stands and stalls from local organisations and charities, including a stall for the Cystinosis Foundation UK, organised by long term supporter Elizabeth Forsyth of Mintlaw, Peterhead in the North East of Scotland. A variety of items were on sale to raise funds for the Foundation, ranging from quizzes, hand made baby knitwear, home made jam and Cystinosis Foundation branded tea towels. And one of the purchasers of a tea towel was none other, than Alex Salmond, First Minister for Scotland.

Alex Salmond, who is also the MP for Peterhead’s constituency of Banff and Buchan, was keen to hear of the work of the Foundation and the fundraising efforts of the grandparents of local seven-year-old Lena Forsyth, who suffers from Cystinosis. And continuing the local theme, Mr Salmond learnt of the Cystinosis research being undertaken by Professor Cairns at the Robert Gordon University in Aberdeen.

As well as raising monies for the Foundation, the Peterhead Harbours Open Day served as a wonderful opportunity to increase awareness of Cystinosis, which is particularly hard given the rarity of the condition. The Foundation would also like to highlight the efforts of Lena’s grandmothers – Elizabeth Forsyth, whose stall raised £258.60, and Janet Sladdin, who produced the jam and also designed and organised the tea towels. To date, 417 tea towels have been sold raising £1,324! A big thank you is due to both grandmothers for their continued efforts. 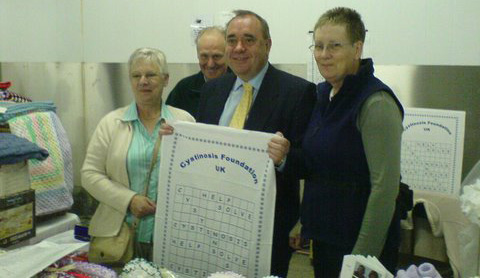